The Hatebur COLDmatic machines CM 625 and CM 725 will be offered in future with even more unused scopes: The Direct Drive in Combination with exisiting decentralizied drives of the CM 625/CM 725 offers savings potential. 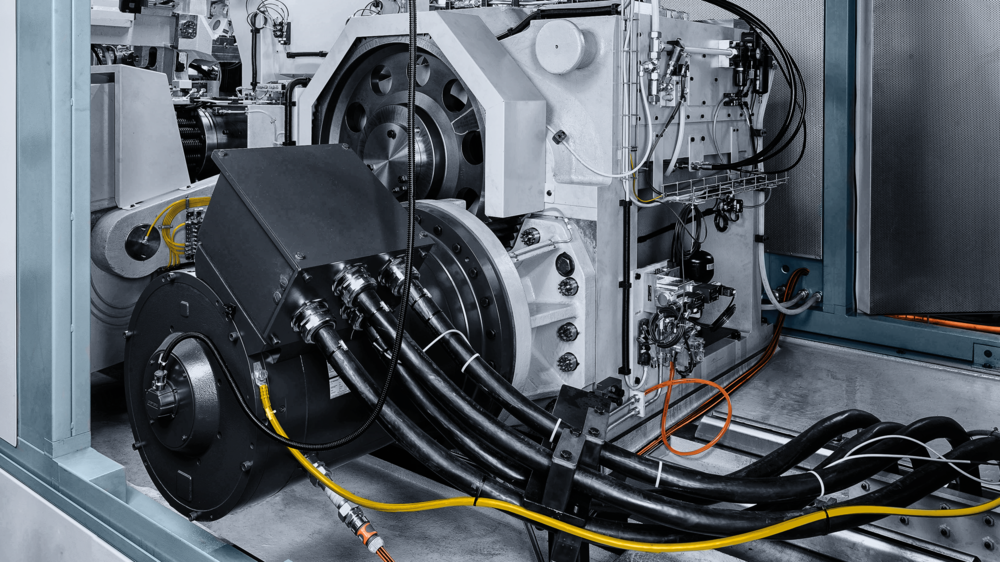 Following the successful introduction of servo drives in parts transport and wire feed, the resulting development of the CM 625/CM 725 is progressing with the launch of the direct drive.

Direct drives have already been used in sheet forming for some time and are already widespread. Their use is less common on horizontal multistage forming machines, due to the complex technology and costs involved. The solution developed for the CM 625/CM 725 now offers the greatest advantages of this technology with a very good cost-benefit ratio.

Using the servo drive means that the drive belts, flywheel and clutch/brake combination, amongst others, are no longer necessary. The additional components required for the direct drive are virtually maintenance-free.

The drive motor used, known as a torque motor, is a water cooled multipole synchronous motor, which works using permanent magnets. As with every servo motor, an encoder system regulates speed and position. As already mentioned, direct drives do not have a flywheel, meaning that they do not have kinetic energy storage. A capacitor bank is built into the drive cabinet to provide the energy required for forming. These capacitors are able to release large amounts of energy during forming and are charged in the off load phase of the coldformer. This made it possible that the machine connection power with direct drive remains at the level of the standard coldformer.

With the standard locally driven systems for wire feed and parts transport, the CM 625/CM 725 already offers a level of flexibility in kinematics that was unheard of until now. For example, the gripper movement or transfer unit speed can be changed independent of the machine. This means it is possible, to optimize the forming tools or make parts transport more reliable at a higher output level. Combining these options with a direct drive can also influence the pressram movements.Generally, the speed in the front dead center of the machine, i.e. during the actual forming process, can be changed, without reducing the output level. For example, a movement similar to the knuckle joint press can be generated by reducing the pressram speed in the front dead center. Functions like this can significantly improve the tool life of the forming tools. Production costs can therefore be saved on standard tools in general and segmented tools in particular. Even various aluminum alloys can be better formed at slower speeds.

At the same time, the new drive also offers advantages on long or heavy parts. The pressram movement can be distorted in such a way that the pressram moves slower in the rear area than in standard operation. This means that a larger time window can be provided for transporting longer or heavier parts, leading to more stable parts transport. At the same time, however, an opposite application is possible: Long parts can be transported more quickly than in standard operation, which prevents collisions with the tools already  progressing from the next stage. For operators, this results in the option of manufacturing longer parts on the same type of same machine.

Partially increasing the speed during the shearing process is also possible, as are asymmetric functions whereby the front dead center of the machine is not in the middle of the pressing cycle. With the huge torque that the drive provides over the whole speed range, parts can easily be formed in set-up mode (setting speed), where the forming machine can be set more quickly, since there is no need to raise the flywheel after adjustments.