As even long-lasting forging presses like a Hatebur AMP 70 HFE reach their output limits after 20 years, GKN Driveline in Trier commissioned a new Hatebur HOTmatic HM 75 XL in 2011 as a replacement. 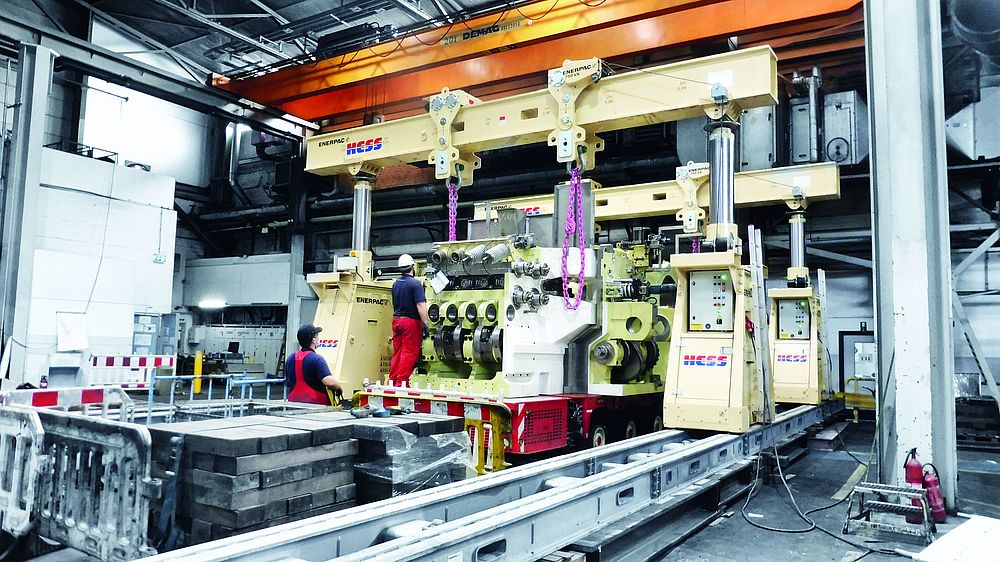 Since the company was simultaneously swamped with a flood of orders, the old machine had to continue producing for almost ten years. Now, the whole machine body of the tried-and-tested AMP 70 HFE quality press has been renewed – a major feat, which demanded top performance by all involved. Since spring 2021, the now thirty-year-old machine has been shining like new.

In 2010, the managers at GKN Driveline in Trier decided that 20 years was enough: The time had come to replace the existing Hatebur AMP 70 HFE hot forging press. So, the largest Hatebur press, a new HOTmatic HM 75 XL, was ordered and installed. That was ten years ago. What no one had predicted was the strong economic recovery after the financial crisis and a high demand for orders from the automotive industry, which meant that the old press had to continue working. It was a surprise to everyone that it kept working so brilliantly until recently. "Up until the end, the trusty AMP 70 kept producing high-runner parts in 20 weekly shifts with weekly quantities of up to 165,000 parts, and has earned our utmost respect," says Dominik Gangolf, responsible project manager at GKN Driveline in Trier.

However, signs of wear from 30 years of heavy use became apparent in the base element of the press too, where tiny cracks were visible. To replace or to repair? That was the key question, and after thorough costing and consideration of all aspects, the decision was made to repair. But this called for a drastic measure: Replacing the machine body. "A replacement like this is almost like open heart surgery," explains Gangolf. GKN Driveline Trier had never experienced this before. "This isn't something that happens every day for us either," confirms Stefan Bühler from the machine manufacturer Hatebur, which has been servicing the customer GKN Driveline for many years.

Ferrari fans in a frenzy

GKN Automotive is a globally active Tier 1 automotive supplier, which has specialized in components for vehicle drives for many well-known automotive manufacturers, such as BMW, Mercedes, Porsche and Ferrari. In a Porsche, for example, a drive shaft from Trier transmits the gigantic torques from the engine to the axles. And there's nothing like a project to make the automotive world prick up its ears. Currently, the drive shaft for the first SUV in Ferrari's history, the F175 Purosangue (which translates as 'thoroughbred'), is being produced – a revolution which is putting Ferrari-lovers in a frenzy in 2022. GKN Driveline has already proven that it can play in this league with the Ferrari GTC4 Lusso (F151).

With close to 450 employees, the plant in Trier is one of 54 sites with a total of over 27,000 employees of GKN Automotive, which has a correspondingly long history. As early as 1964, Rheinmetall was running a forging and pressing plant over 135,000 square meters, which GKN took over in 1993.

Today, around 80 million precision forgings leave the plant in the old Roman city every year, which are formed out of almost 80,000 metric tons of steel on 11 presses. This is primarily made up of components for the drivetrain such as universal shaft parts, i.e. pins, shafts and rings. These range from cold-extruded parts under 100 grams to hot-forged parts weighing several kilograms. High-runner parts include joint pins, for example, the variants of which are between 1.5 and 3.5 kilograms. Customers are generally other GKN plants such as those in Offenbach am Main or Mosel in Sachsen, both in Germany, which process the parts further. But many OEMs also form a direct part of the customer base.

The Hatebur HOTmatic AMP 70 HFE is a reliable hotformer for a broad range of parts. In a fully automated way in four forming stations and with a press load of 15,000 kN, it produces 50 to 80 forgings per minute with diameters up to 145 millimeters with workpiece weights of between 400 grams and five kilograms. The highly precise servo infeed ensures the proven excellent process reliability and repeat accuracy. In this way, the machine can be fed bar material with diameters from 36 to 75 millimeters.

The electronically controlled device for cutting out the bar ends, ESA 600, ensures a suitable cut-off length of between 50 and 150 millimeters. The HFE equipment facilitates the manufacture of extruded parts at forging temperature. "Our customers use it primarily to forge automotive and bearing parts, such as wheel hubs, gear blanks, bearing rings and universal shaft parts," reports Matthias Prischl. "It has probably produced over 350 million parts for us over the years. Probably no one can say for sure," says Gangolf.

The task was as follows: Disassemble an 85-ton hotformer body. Remove it from the hall. Bring in the new machine body. Install all the attachments and install software. Finally, commission the refurbished press. Before work began in September 2020, the project managers had already done around a year and half’s work, in which everything was clarified, planned and debated. This only served to increase their delight as the old machine body was uncovered and removed from the hall in early October. In the same cycle, the new body was brought into the hall and positioned beside the foundation.

After the old machine body had been extracted, the foundation was also thoroughly inspected and repaired. Thirty years of daily use of the HOTmatic AMP 70 HFE, forging precision parts with up to 35,000 press impacts and a 15,000 kN press load, also left its mark on the foundation. In early November, the managers then positioned the brand new machine body on the foundation.

Smooth teamwork – hand in hand without a hitch

So that the old machine body could be exposed, all the attachments had to be removed. This affected, amongst other things, the complete piping, the entire electronic installation including cabling and control system, as well as, quite obviously, the upstream material supply with the shearing unit and the downstream part discharge. Service technician Marcus Kasel praises the process: "It was impressive how all the teams worked hand in hand."

Schedule helped by the coronavirus and automotive crises

Throughout the entire duration of the project, three Hatebur service engineers were supported by task-focused staff, both in-house at GKN and externally. Up to 24 people spent time on the project. "The coronavirus and automotive crises played into our hands, of course," explains Gangolf. Yet on the other hand, there were coronavirus-related delays because parts from Italy were not able to be supplied on time. Lastly, and importantly, hygiene concepts to contain the risk of infection had to be created.

Trial start of production after six months of retrofitting

When the new machine body was set onto the foundation, the critical phase of the project began, which excited everyone involved. Now it was time to see whether everything had been planned and prepared correctly. Hopefully, everything would work. And it works! The feelings of euphoria were immense when the first trial series parts were put into operation in February 2021, after around six months of retrofitting. Everyone was relieved – and happy, too, that a refurbished, 135-ton Hatebur press can now start its work at GKN Driveline in Trier.