Hatebur had the opportunity to do an interview with Mr. Dominique Garbe, Plant Manager at LISI AUTOMOTIVE in Dasle/France. 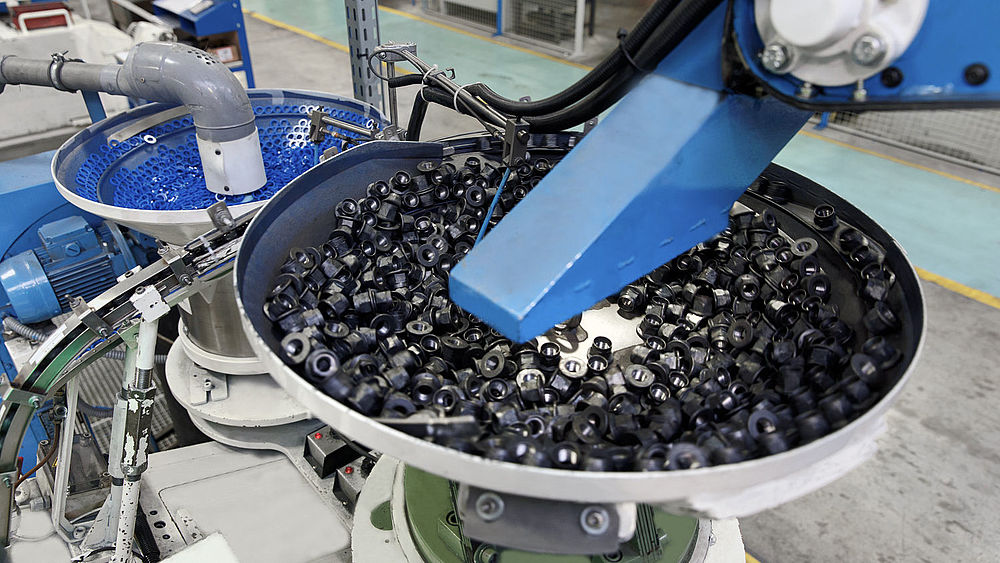 As a long-term customer of Hatebur, it was especially interesting to learn more about the overhaul of one Hatebur COLDmatic AKP 4-5 machine and the general view on future trends. Mr. Garbe, who has been working for LISI in Delle for 10 years, took over the plant at Dasle in 2011. He has been part of the project team for the overhaul of the COLDmatic machine.

Although the LISI GROUP was founded in 2002, the company can traces its origins back to 1777, when Mr. Frédéric Japy founded a watch movement factory in Beaucourt. LISI was born in the eighteenth century out of the merger of several family-owned companies in Montbéliard and Belfort. The site in Dasle was built in 1922 by the Beley family and integrated into the LISI GROUP in 1998. It covers an area of 14,000 m2 . More than 100 people work at the Dasle plant, which has a €37 million budget for 2002.

The plant is located in the north of the department of Franche-Comté, where industrialization began very early in a number of different areas, but with a common technical theme: iron working. The technical excellence that was developped for metalworking then spread to other industries in the region, such as watchmaking. During this time, bolts and screws were produced on an industrial scale for the first time in France by the company Japy-Frères, for bicycles and cars.

The LISI GROUP reflects this progression: Its original business, the production of metal wires and screws and bolts gradually transformed, adapting to the demands of an industrialized world that has greatly evolved over the past two centuries. The LISI GROUP currently produces high technology fittings (threaded and clipped) for the automotive, aerospace, and medical sectors. With its still predominantly family shareholding that allows it to pursue a long-term strategy, the LISI GROUP continues to grow in France and around the world, offering its customers optimal service and responsiveness.

The LISI GROUP had an annual turnover of € 1.23 billion in 2020, with more than 9,600 employees. It produces goods at 44 plants in 13 countries and delivers its products to four continents. Of the 27 production sites in Europe, 20 are in France. At present, one Hatebur COLDmatic AK 4-6 and seven COLDmatic AKP 4-5 are used by LISI GROUP. The first Hatebur machine was put into operation back in 1986 at Melisey. The Group’s most important customers are almost all large automotive producers, including ZF, Stellantis, Volkswagen, Renault Nissan and BMW.

The site in Dasle specializes in the manufacture of threaded fasteners and hollow components, such as technical nuts, weld nuts, drain plugs, spacers, special components for seat mechanisms, interior safety systems, and engines. These high-precision parts are produced by combining cold forming technology with threading and machining. LISI AUTOMOTIVE’s product strategy is to gain a significant share for multi-material solutions and new materials (vehicle weight reduction) in order to meet customers’ demands for more complex parts.

The Hatebur COLDmatic machine that is now being overhauled has been producing since 1987. Normally, the machines run on 2 shifts per day (5 days a week) and only one person drives both AKPs at the same time. Production series may vary from 40,000 up to 350,000 parts. The parts produced on Hatebur machines represent approx. 13% of the total monthly volume.

The most appreciated advantages of the Swiss machines are their easy changeover and the ability to transfer very short parts. The operators also like the mechanical reliability, the ease of handling, and the man/ machine interface.

A team of two Hatebur service engineers (for the mechanical work) and one Hatebur Lumag Service (HLS) engineer (for the scraping work) were delegated from November 8th until the December 8th, 2021. The aim of this overhaul was to replace the complete set of Delimon lubrication distributors. To achieve this task, lots of the subassemblies for the machinery had to be dismantled, included the press ram. As such, this was the perfect opportunity to check the press ram clearances, which had been noted as too tight during the prior inspection of the machine. It was also confirmed that the pitman pin and bushes needed to be repaired after so many years. The whole assembly (press ram and Pitman) was sent to Switzerland for inspection and repair and returned to Dasle after a couple of days.

All lubrication lines were tested and flushed with new oil. Once everything was reassembled, a two-hour test run was initiated by the operator of the machine, and was successful. As everything was running smoothly, the final meeting culminated in approval by LISI AUTOMOTIVE.

As always, this is in-depth work that often reveals the need for unexpected repairs or replacement of parts that could not have been detected before dismantling. Good communication between the teams is crucial in such cases. Hatebur and LISI could worked together to find the best way of getting the job done on time.
Many thanks to the maintenance team of LISI, on behalf of Mr. Oudart, and the Hatebur and HLS team on site for their great teamwork to pull off such delicate and precise work!

2020 and 2021 were very difficult for everyone. During this period, LISI were faced with the challenge of constantly adapting the production tool to the demand. LISI has focused on flexibility, agility, and responsiveness. Like many other companies, employees in support services have been working remotely. In addition, the management team realized that the expectations and demands of employees are no longer the same, and that the relationship between professional and private life has changed profoundly.

The French-based group expected to see a massive return of production to Europe that had previously relocated to Asia, but apart from a few targeted situations, this does not seem to be the case. On the other hand, competition has become tougher and remains very strong, with demands for price cuts that are beyond any standards that seen until now. Worldwide companies experienced delivery bottlenecks, resulting in many delays. Like all price increases prices increased on their supplies, including energy and transport. Tensions exist in the supply chain and are now increasing with the war in Ukraine. The outlook is very short term and highly changeable and unstable.

Looking into the future

Regarding the major trends, such as e-mobility and other new developments, LISI sees a growing demand for increasingly complex and specific assembly solutions, and a strong trend towards the development of all-electric or hybrid vehicles. LISI is already offering adapted solutions. The amount of orders taken in these areas is very significant and demonstrates the robustness of its product strategy. The new products remain of the same type, but with different materials, like aluminum, although some developments are very specific, such as screws for fixing battery covers.

Digitization is a major focus for LISI, with deployments underway in a number of pilot plants. The best example is the Melisey plant, which was recently awarded the “factory of the future” label. The implementation of Industry 4.0 at Dasle will therefore be an objective for 2024.

Challenges over the next couple of years

There are several challenges that LISI has to face. The most important will be the management of human resources. It will be key to retain teams in jobs that require long training over several months. Other important points will be to maintain the ability to respond to customer demands, digitalization, and ensuring flexibility and agility of the means of production.